Tales from a Paranormal Tour Guide

An Inside look the Haunted History of Seattle

When a city has as much history as Seattle, there’s bound to be some ghost stories. And with subterranean ruins, passages, and plenty of sordid history, it’s the perfect place for an Underground Paranormal Experience.

Eric Olinsky is a professional tour guide for Bill Speidel’s Underground Tour. Having started off leading history tours in Washington, DC, he moved out west to Seattle. A great storyteller, especially where history was concerned, he got a job leading the daytime tours. Soon, he was given the additional the task of leading the Underground Paranormal Experience, guiding visitors into the spooky depths of Pioneer Square’s subterranean remains in search of ghosts.

“What I like about the paranormal experience is that it’s much more open-ended,” he says. “Generally there will be signs of stuff. It’s different every time.” 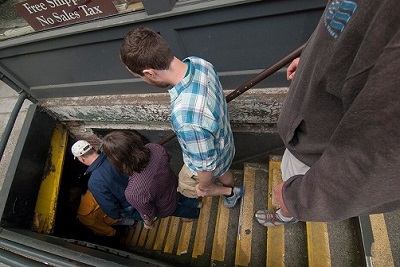 While not as detailed as the daytime tours, Olinsky does make sure visitors get some history for context. After the Great Seattle Fire in 1889, the new city decided to rebuild on top of the ruins of the old, with the remains of shops and streets used as storage and ways to get around during reconstruction. In 1907, the underground passages were condemned in 1907 for fear of bubonic plague and became the home of prostitution rings, gambling halls, speakeasies, and opium dens.

That’s where the paranormal tours come in. You are led down into the dark underground in hopes of finding wayward spirits. Olinsky will point out probable places for the paranormal, like where bodies had been found or sites of violent transgressions. “Places with great crime and great sorrow lend themselves to having a better paranormal experience,” he says. “This is Seattle, where you had the original skid row. So this is a place where all kinds of things are trying to get in touch with you.”

And people certainly try to get in touch with the ghosts. “We get guests that are super into it. The only way to get open access to these tunnels is through us,” he says. “People walk around trying to get a reaction, like tapping around on the walls and trying to get a response.”

To many, paranormal investigation is serious business, so guests are equipped to detect anomalies. “Probably the most important piece of equipment we give guests is the Mel Meter; that’s what’s picking up the electromagnetic fields around them. It also picks up changes in temperature.” A red LED light is included since the tours take place in the dark. Olinsky says that it being a red light is important, as bright lights can blind fellow ghost hunters and can cause your eyes to play tricks on you. “The other piece of equipment we give is essentially a voice recorder with headphones better than your ears. It’s just going to pick up things that are too faint for our ears.” 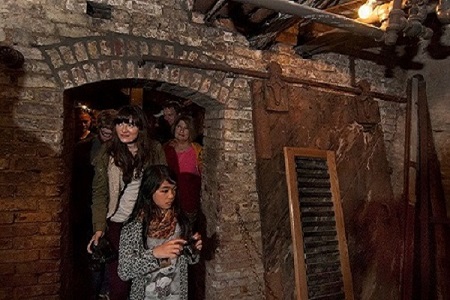 So, this begs the question: has he witnessed anything especially strange? “I definitely came into it with a skeptical view of things, but once you go down there with the guests and see everything going on, it can be hard.” Most common are unexpected gusts of wind coming out of nowhere. He says he wasn’t around for most of the really spooky stuff that’s been caught on video, but he has seen some strange things. “Honestly, some of the pictures that people take while they’re down there; some of the faces that you see in some of these orbs, it’s actually sometimes hard not to see them.”

For Olinsky, being a guide for the Underground Paranormal Experience has been a bit of an eye-opener. “I accept that there are things that have happened that I can’t explain with anything scientific, though I’ve tried. I’d say I’m still on the skeptical end of things, but it’s hard not start to believe.” Still, he says whether people believe in ghosts or not, the most important things is that the tour is fun. From witnessing unexplained phenomenon to an excuse to belt out the Ghostbusters theme song, it’s certainly an experience worth checking out.

-Photographs by Cheryl Easter for the Underground Tour