Voodoo Doughnuts' Magical Pastries are Worth the Weight

The Story of the Only Doughnut Shop With a Record Label

Step into any of Voodoo Doughnut’s locations, from Portland, OR to Denver, CO and you might as well be walking into a doughnut circus. With eclectic music, unique art pieces, and a rotating glass display case showing off the colorful varieties of doughnut, it’s crazy and vibrant in the best way. 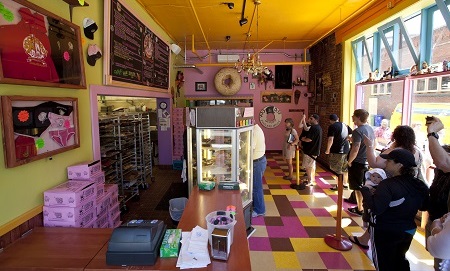 “Except we’re nice to the elephants,” jokes co-founder Tres Shannon.

What hits you first, however, is the smell. When fifty types of doughnuts are all made in-house, of course, the shop is going to have that rich, delicious, fried pastry aroma. “I’m still preaching the mantra that it’s the smell that sells,” Shannon says.

Pogson agrees. “Your senses do a lot of the work. One minute you smell it, the next you’re in line.”

Once in line, you might find it tough to choose just one, as there are enough options to make Homer Simpson drool. The most recognizable is the Voodoo Doll Doughnut, which is filled with raspberry jelly, topped with chocolate frosting, and has a pretzel stake stabbed through it. The daring might try Viscous Hibiscus or Tangfastic, which use flavors not typically found in doughnuts. There are decadent options like the Gay Bar, a raised yeast doughnut filled to near-bursting with Bavarian cream and topped with vanilla frosting and a row of colorful fruit loops. But Shannon is particularly proud of their Bacon Maple Bar. “It’s the OG Bacon Maple Bar. I may be giving myself a big head, but that’s where the bacon-maple craze came from and no one has proven me wrong yet.” 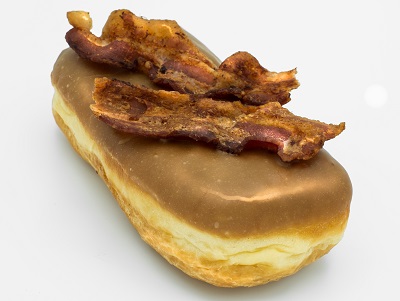 Fifty types of doughnuts may sound ludicrous, but that’s because the list includes all the standard options like glazed, jelly-filled, and chocolate along with their specialties. “Everyone thinks we just have these crazy doughnuts, but we have all the staples,” says Shannon.

The duo learned how to make the doughnuts themselves from the experts down in Pico Rivera, CA, so they know the secret to making a truly good doughnut: follow the recipe. Simple as it sounds, baking is a science, with exact ingredient ratios, the timing for proofing and frying, and more. And while innovation is good, sometimes it’s best not to mess with perfection. Pogson explains, “Someone tries to do a shortcut, then mis-explains the shortcut to someone else so they try it and then 8 months later, it’s completely wrong. When that happens, we tell them to go back to the recipe.” Luckily, despite having 200 employees across seven locations, including both Universal Studios CityWalks, they trust their bakers to come through.

The doughnuts might be exceptional, but don’t call them “gourmet.” The duo prefers to think of them as more “exotic.” “It was kind of our answer to the fancy food craze,” says Shannon. With shops and bakeries popping up everywhere selling gourmet coffee and bacon and cheese, there wasn’t much to appeal to regular, on-the-go folk. He says when they came up with this venture “I wanted to know where I could get a good, fast piece of junk food.”

Don’t expect them to be branching out into cupcakes, though. “Cupcakes are our mortal enemies,” says Pogson. “Cupcakes and doughnuts don’t line up well.” 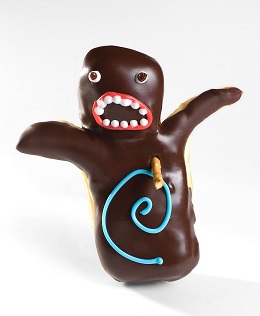 Speaking of cupcakes, Voodoo Doughnut also has the distinction of owning its own record label. “Someone wrote a song for us called It Ain’t No Cupcake Working at Voodoo Doughnut,” Pogson says. It was about a janitor they’d had at the time who liked to work naked, and the duo loved it so much they decided to start Voodoo Doughnut Recordings in 2013, releasing a baker’s dozen vinyl singles, all referencing doughnuts in some way. Since then, they’ve earned the distinction of being “The World’s Leading Doughnut-Based Recording Company,” covering genres from punk to acapella, with many of the signed bands being Portland locals.

At the end of the day, though, it all comes down to the doughnuts. Despite having only seven locations, these fried treats are becoming known all over the country and have even started spreading to different parts of the world, being talked about in Tibet, Japan, and even Tanzania. Unfortunately, since doughnuts don’t travel well, these amazing pastries can’t be shipped out, but they’re well worth seeking out your closest Voodoo Doughnut shop.