Skeletons in the Closet on Display

Inside the Controversial Museum of Death

The Museum of Death may sound like some gimmicky Halloween pop-up, but in actuality, it’s one of Hollywood, CA’s most remarkable attractions. Open year-round, seven days a week, it’s a constant reminder that death is inevitable and not something to be ignored.

“No one likes to think about passing, especially about themselves or a loved one, but the stark reality is that we all die,” says Erek Michaels, the museum’s manager. 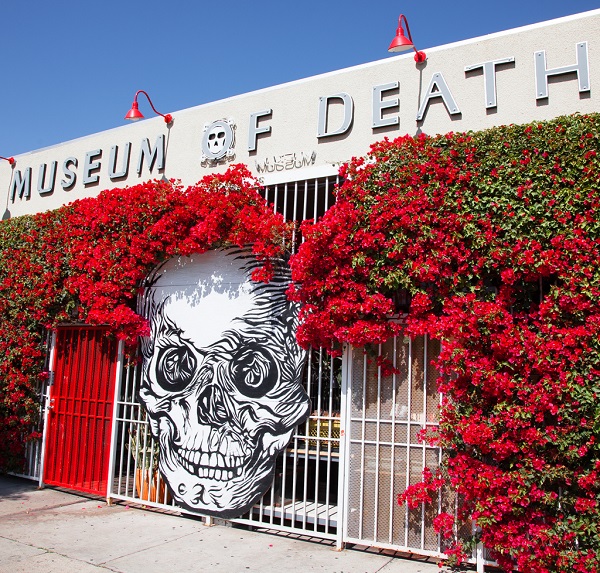 The museum may not be Smithsonian-sized, but its macabre contents are vast. He says, “I’ve never seen anything the size and scope of this collection.” Included is the world's largest collection of serial murderer artwork, plus shrunken heads, antiques from funeral homes and mortuaries, and taxidermied animals. “Before working here, I’d never thought about how a shrunken head was made,” Michaels laughs.

Much of what they have on display is as authentic as it gets. Charles Manson crime scene photos, coffins, and the guillotined severed head of French serial killer Henri Landru, known as the Blue Beard of Paris, are only a few of the many crazy items on display. On display is a set of clothes and shoes from the Heaven’s Gate mass suicide. “We get new acquisitions just about on a daily basis at this point.” In fact, they’ve gotten so much that they’ve opened a second location in New Orleans, LA.

The museum gained notoriety when it first opened 20 years ago for displaying the original artwork of infamous serial killers like John Wayne Gacy. The owners, husband and wife JD Healy and Cathy Schultz, wrote to him and others who were willing to have their work displayed. “Most of these men and women didn’t have the chance to express themselves creatively,” Michaels says.

And while the concept might be rather grisly, the aim of the museum is to educate. In fact, as they have such an extensive amount of original crime scene photos, autopsy videos, and exhibits on serial killers, they get quite a few field trips from forensics and criminal justice classes. But the Museum of Death is open to anyone interested. “It is not scary within the museum. That’s usually people’s first concern,” says Michaels. “However, we do make sure people understand that there are explicit materials in the museum. You can’t sugarcoat it.”

The museum sometimes attracts some rather misguided people who consider these serial killers to be their heroes. But Michaels says that the exhibits emphasize just how horrible the crimes were, making them real eye-openers. “For people who would want to idolize these people and put them on a pedestal, because they haven’t seen the aftermath, sometimes the photographs are a stark reminder of what they did.”

Despite it all, the real purpose of the Museum of Death is to make people appreciate life. Death is inevitable, but that doesn’t mean people must fear it. “It’s a very unique and life-affirming experience,” Michaels says. “There is no other place that engages people on this level and forces them to accept this uncomfortable fact.” After all, of the five stages of grief, acceptance is the last and most crucial step to living your life.