When dreaming of racing boats on Cape Cod, one might imagine sailboats or well-appointed yachts. However, a true spectacle comes from the Cape Cod Viking 200 Cardboard Boat Challenge, an annual event in West Dennis where businesses, organizations, and individuals create elaborate, two-man boats to compete for bragging rights to the coveted Viking Cup and Rubber Ducky Trophy. 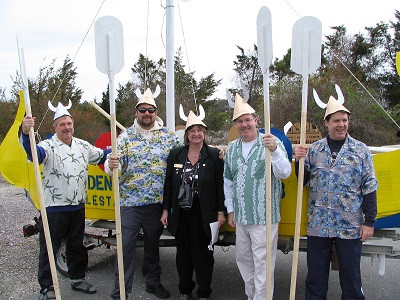 The twist is that boats are only permitted to be made from specific materials; cardboard, duct tape, glue, caulking, and paint. Sounds easy? Well, the boat must also carry a team of at least two people through a 200-yard racecourse on the Bass River.

The designs, however, are limited only by the imagination. Participants can choose function over fashion, creating a sturdy and utilitarian boat. More creative shipwrights might prefer a vessel that stands out, even if it’s not the fastest. Past boats have taken on the forms of yellow submarines, been decorated to look like dragons, and even taken inspiration from actual Viking warships.

The actual racecourse isn’t decided until the day of, so crews had best be ready for anything. They’ll be expected to round a few markers, so it’s best to get some practice in and ensure their communication and teamwork is on point. As for the ships, don’t think anyone can sneak wax-treated cardboard or unlawful materials past the judges’ keen eyes. The illustrious judges of the Viking race committee will meticulously inspect all the entrants before the race starts and may even check the hull with the dreaded ice pick test. 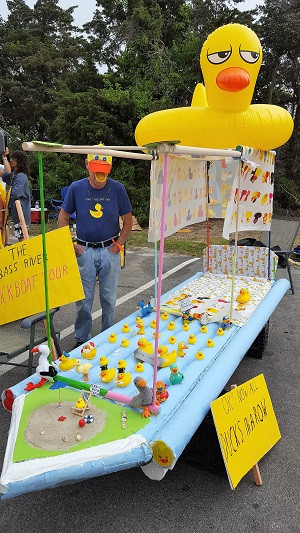 The winner of the race is awarded the Viking Cup, the infamous Rubber Ducky Trophy, and bragging rights for the whole year; possibly the greatest prize of all. But the victors shouldn’t expect to rest on their laurels; whoever wins must be prepared to defend their title next year. Should they lose, they must hand over the Rubber Ducky, though they’re allowed to keep the Viking Cup.

Not all the boats survive, but no one’s in real danger; all participants are required to wear Coast Guard approved life preservers. Luckily there’s an award for Most Spectacular Sinking. After all, if you’re sinking, you might as well do it with style. Whether by making a grand speech, saluting solemnly while playing Taps on the kazoo, or pretending you’ve been attacked by a Kraken, there’s no wrong way to go down with the ship.

In fact, there are several supplementary prizes that are based solely on enthusiasm and creativity. There are awards for Most Artistic, Most Outrageous, and Best Team Spirit. Going the extra mile by including costumes, a pit crew, and overall excitement goes a long way towards winning these prizes.

Anyone going for the Largest Crew award had best plan carefully. As the boats can only be propelled by paddles and the crewmen must be inside the boat, not pushing it along while swimming, it’s best to find people that are light but strong. No sails

The Cape Cod Viking 200 Cardboard Boat Challenge meets at Sundancer’s Restaurant on July 28th. Racer’s registration begins at 9:00 am, public viewing and judging of the boats are at 10:00 am, and the race begins at 11:00 am.