A Cabinet of Wonders: Inside the Edward Gorey House

Quirky and unassuming, this is one of Yarmouth Port's best-kept secrets

One of Yarmouth Port's best-kept secrets, the quirky and unassuming Edward Gorey House, located just off Route 6A, is a house museum that celebrates and preserves the legacy of the famous illustrator Edward Gorey. Best known for his animated introductions to PBS Mystery! and self-authored and illustrated books like The Doubtful Guest and The Gashlycrumb Tinies, Gorey pioneered a distinctive style of pen and ink drawings that is simultaneously comical and unsettling. 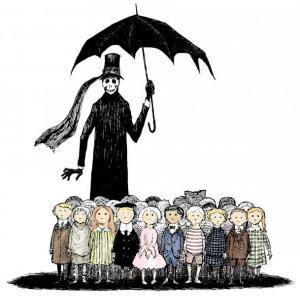 Fun for kids and adults alike, the House offers docent-led tours, family activities and events, and unique exhibits. “The Edward Gorey House is a very unique museum about a very unique artist,” explains curator Gregory Hischak. “Edward was a gifted writer and artist who tackled very dark subject matter in a very light and amusing way—which is exactly how we strive to make the museum feel.”

Edward St. John Gorey was born in Chicago in 1925. A child prodigy, Gorey began drawing at the age of two. Throughout his childhood and adolescence, he contributed illustrations to school publications, art shows, and Chicago newspapers. After graduating from Harvard in 1952, he accepted a position with Doubleday Anchor in New York City and quickly became recognized as a major commercial illustrator.

Gorey’s first book, The Unstrung Harp, was published in 1953 and is considered a major precursor to today’s graphic novel. Over the course of his long career, Gorey wrote more than one hundred books, the last of which was published in 1999, only one year before his death.

In 1979, Gorey purchased a two-hundred-year-old sea captain’s home in Yarmouth Port, where he began to live year-round in 1983. The house became a museum after his death. “The museum, which was formerly Edward’s house, reinvents itself yearly, each time to show another aspect of Edward's body of work,” Hischak says.

The 2017 exhibition, Edward Gorey's Cabinet of Curiosities, explores Gorey’s massive personal collection of objects, ranging from potato mashers and graters to toys, antiques, and other oddities. “This year, we have turned the House into a Wunderkammer of Edward’s collections,” Hischak says. “Edward collected a lot of stuff.” A sixteenth-century forerunner to the modern-day museum, a Wunderkammer (“cabinet of wonders” or “cabinet of curiosities”) consists of a highly unorganized collection of oddities, antiques, natural objects, and more.

The House’s Wunderkammer explores the objects that Gorey amassed during his years on the Cape—objects that he found interesting, that stimulated his imagination, and that brought him joy.

Plan to spend an hour exploring the House and its grounds. “The most surprising thing about the House, for those who perceive Edward as a dark, gothic recluse is how bright and airy the House is, and how fun it is,” Hischak explains. “Not just in the changing exhibit but in the docent-led tours and such delights as The Gashlycrumb Tinies Scavenger Hunt—murderous fun for all ages!”