Northwest winds blew the spilled cargo away from Nantucket

In the photo below, news photographers aboard a United States Coast Guard helicopter snapshots of the wreck of the Argo Merchant off Nantucket in December 1976. Kneeling in front is Bill Quinn. (Photo from Bill's collection). A few days later (photo inset) high seas broke the Argo in two, spilling her cargo into the sea. Northwest winds blew the spilled cargo away from Nantucket (Bill Quinn photo). Bill Quinn (June 29, 1926-April 13, 2014) was a local historian, maritime history expert, photographer, author and good friend of the Best Read Guide. For the more than two decades the Best Read Guide has been in print, Bill Quinn's Shipwrecks of Cape Cod, featuring photos of his own and photos from his vast collection, have graced its pages each month during the summer.

Photo from the collection of William P. Quinn, Orleans, MA 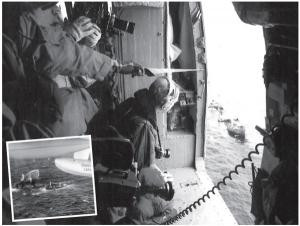