Only three fruits are indigenous to North America: cranberries, Concord grapes and blueberries.

Everybody has had berry jams and jellies, breads and confections, but you may not know how useful these berries once were.

When the Pilgrims first arrived in the 17th century, they soon learned the many different ways Native Americans used sassamanesh or cranberries. 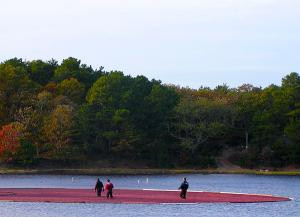 Native Americans crushed cranberries with venison and melted fat to form a high protein cake called pemmican. After drying in the sun, the cakes were taken on long journeys. In addition to other recipes, Native Americans used cranberries as a medicine to treat various ailments and as a dye for rugs and blankets.

In the 1800s, cranberries, rich in Vitamin C, were fed to crews at sea to fight off scurvy.

Blueberries were used in a tea thought to be good for the blood and the juice of the blueberry was thought to cure a cough. Native Americans taught the colonists how to dry blueberries and store them for the winter.

Blueberries were also used to dye cloth by both Native Americans and Colonists and the Colonists mixed the berries with milk to make gray paint.

Green Briar Nature Center in Sandwich hosts a Blueberry Day in August and a Cranberry Day in October. AD Makepeace in Wareham and Cakounes Farm in Harwich host bog tours where you can watch cranberries being harvested.