Gods & Goddesses at the Provincetown Carnival

The Provincetown Carnival is an Annual LGBTQ Celebration 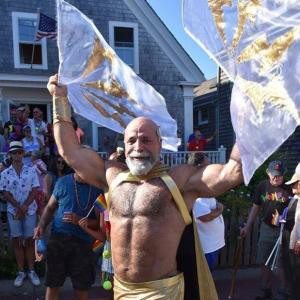 The Provincetown Carnival is one of the largest outdoor celebrations in Massachusetts. From August 12-18, visitors and locals alike can celebrate LGBTQ life with a town-wide festival. An annual tradition in its 39th year, this weeklong event is serious business for the town, especially when it comes to the theme. “The selection of the theme is a very hot topic in town,” says Robin Lapidus, Executive Director of the Provincetown Business Guild.This year’s theme is Gods & Goddesses, and Lapidus says it’s a great way to see how creative people can get. People are encouraged to dress up as their own interpretations of deities, not just from the Greek pantheon, but from religions all over the world. “We should see a pretty wide berth of costumes and building decorations,” she says. Vikings, Hindu gods, and more than a few depictions of Jesus will be there, ready to celebrate. “We know that we will see some really interesting views on gods and goddesses.”

A huge LGBTQ event, the Carnival is a place where locals and visitors alike can party and feel welcome. “It’s everybody. It’s not just the people in the parade, it’s people in their businesses and along the street,” says Lapidus. “People say that it’s their favorite day.”

From floats to buildings, the whole town decorates for the event. The parade is always a major production; beyond just the people in costumes, there are elaborate floats cruising down the street, drag queens giving performances, and plenty of houses and businesses get in on the action. “I think over time the décor has changed from a float in the parade to a façade on a building,” she explains. “And we’re not talking about a few twinkle-lights.” Banners, inflatable decorations, and so much more can be found adorning the town’s local buildings.

But the Provincetown Carnival is more than just the parade. “The parade is the thing that most people make sure they’re in town to see, but really the festival starts before that,” says Lapidus. There are events going on all over town, from boat cruises to Broadway shows to 21+ pool parties, and everything will follow the Gods & Goddesses theme. “We are having a toga party, which we’re hoping will be the biggest toga party ever.”

Next year’s theme is still tightly under wraps, but it’s sure to be spectacular. “We announce the theme with the final float in the parade.” She says, “For our 40th anniversary, we’ve been thinking of bringing back all the themes.”