How to Run a Cape Cod Marathon

The Cape is a Great Place to Run a Marathon

Marathon season is in full swing, especially down on the Cape. But what makes them so appealing? “I think it’s an accomplishment,” says Mary Duchesney, Vice President of the Cape Cod Athletic Club. 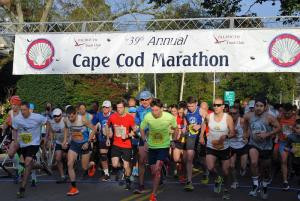 The Cape is an especially great place to run a marathon, with beautiful scenery, fresh ocean breeze, and gentle terrain. Duchesney particularly enjoys the Cape Cod Marathon in Falmouth in October. “It takes you by the beaches and is really well-organized. There are a few hills, but nothing major.” She also enthuses about the Hyannis Marathon in February, as the weather is cooler which is good for running. But really, any of the marathons are great. “It’s just so pretty down on the Cape.”

But with so many marathons throughout the year, which to choose? For starters, think about how long the training takes. “You have to set a goal; it takes 16-17 weeks to train for one.” So, if there’s a marathon next month, skip it and focus on a later race. And different marathons have varying difficulty, so don’t go for anything above a comfortable length and skill level. People who have never run before would be better off signing up for a shorter race with flat terrain during a cooler time of year, rather than a full 10K in the heat of summer.

As for the training itself, the Cape is full of various trainers and athletic clubs for all skill levels. Duchesney says, “There are so many plans out there, and coaches you can ask for help.” Keep in mind that there’s more than just strength and endurance training involved. “It’s definitely a mental game as much as it’s a physical feat,” she explains. “You need to train your mind to push through the rough spots.” That’s why she recommends training with a group instead of alone; groups can offer encouragement and make it more fun.

Duchesney says it’s easy to get hooked. “I’ve done seventeen [marathons] so far. You get kind of addicted to the training.” With so many races along Cape Cod, it’s easy to find ones that suit any skill level. And the better a person gets, the more they’ll want to keep doing it. “Every time I finish a marathon I say ‘I’m done!’ But then another one comes up and I get excited.”

Once the race is over, though, make sure to celebrate with friends and fellow competitors. Go out to dinner, have a night on the town, and enjoy the rush of success and accomplishment, because the next day, no one will have the energy. “The next day you really don’t do anything; you just sit on the sofa,” Duchesney laughs.