All hands were rescued from the lifeboat and sub 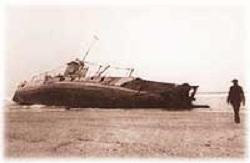 On January 15, 1925, the Navy Submarine, S-19, went aground on Nauset Bar in Eastham. When the Coast Guard received notice, the crew could not initially locate the craft. Every wave crashing against the sub erupted into a mountain of spray, hiding it from view.

Upon locating it, the crew finally launched a lifeboat and started to row out. When within 50 yards, a giant wave hit the bow of the lifeboat and pitchpoled it over. All the men spilled into the frigid Atlantic waters. Although some had close calls, all hands were rescued from the lifeboat and sub.

However, the sub lay on Nauset Bar for three months before it could be removed. (From Shipwrecks Around Cape Cod by William P. Quinn, Lower Cape Publishing, ISBN 0-9369-72-01-7)