Most people think that you can only be a great ice cream shop if you make your own ice cream. Sweet Caroline’s in Forestdale begs to differ, as owner Kim Cotto takes pride in where they get their ice cream. “We are the only ones on the Cape that provide Richardson’s ice cream.” For the uninitiated, Richardson’s is a 300-year old dairy farm just north of Boston, They raise their own cows and use hormone-free milk to produce great ice cream. So, while the ice cream might not be made in-house, Sweet Caroline's still keeps things local and fresh. 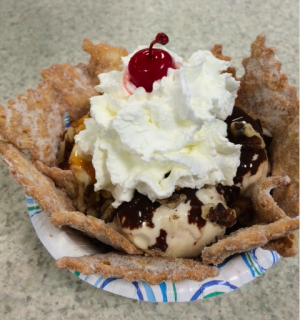 Sweet Caroline’s carries approximately 30 flavors of ice cream, plus plenty of yogurts that are 95% fat-free. “I would duly recommend the chocolate peanut butter,” she says. “It has chunks of chocolate so big I sometimes have to chop up the pieces.”

But just because they don’t make the actual ice cream doesn’t mean they can’t get creative. “We have a lot of specialty items that a lot of traditional ice cream stores don’t.” There are tons of unique treats, like their Strawberry Shortcake Sundae or Key Lime Fusion. They also make their own waffle cones, cookies, and brownies, along with plenty of toppings like fresh fruit, nuts, and their famous green jimmies.

Aside from the ice cream, Sweet Caroline’s is a beautiful place to relax. Originally a garden center, the grounds are kept immaculate. It’s a great place to stroll around while enjoying an ice cream cone on a hot summer day. Cotto says, “I think what sets us apart is just that we have such beautiful grounds and premium ice cream. We didn’t want to reinvent the wheel.”

As for the name, while Sweet Caroline by Neil Diamond is considered a staple of Boston sporting events, it’s actually more personal. “My daughter’s name is Caroline,” she says. The shop was named in her honor on her sweet sixteenth birthday, though Cotto says if she ever opens another location, she’ll need to name it after her other daughter.