If you love the Irish and all things green, you'll have two opportunities to celebrate this March. St. Patrick's Day is on Thursday, March 17 this year, but folks on the Cape double up on their celebration. 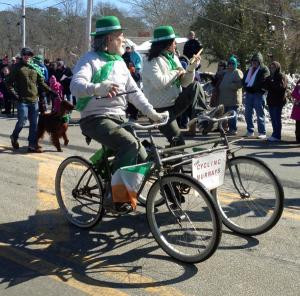 The 11th annual Cape Cod St. Patrick's Parade will step off in Yarmouth at 11 a.m. on Saturday, March 5. The parade is a welcomed splash of color and fun during the Cape's quiet season.

Each year, thousands of St. Patrick's revelers come from near and far to cheer on parade participants. This year, nearly 40,000 people are expected to attend.

This year, a team of magnificent Clydesdale horses from Duxbury will march alongside the always entertaining marching bands, bagpipers, Irish step dancers and floats.

"The parade has grown to become a Yarmouth tradition and a wonderful family event," said Parade Chairman John Fallon.

The two-mile parade begins at Bass River Sports World at the intersection of Long Pond Drive and Route 28 in South Yarmouth and heads west along Route 28, over the Parker's River Bridge to its destination at the Town 'n' Country Motel.

For those coming into town early, the annual Grand Marshal's Dinner Dance is at 6 p.m. on Friday, March 4 at the Cape Cod Irish Village, 822 Route 28 in South Yarmouth. Join Ryan Delaire for traditional entertainment and fare. Tickets are $25. Reserve by calling 508-771-0100.