During the summer, tourists are not the only ones flocking to Cape Cod's shores. The waters off of many of Cape Cod's most popular beaches are feeding grounds for white sharks, who arrive each year in search of seals. While the region's shark population has historically inspired fear and suspicion--most notably immortalized in the iconic film Jaws--it also provides visitors a one-of-a-kind opportunity to learn about these fascinating creatures.

As one of the ocean's top predators, sharks play a vital role in the marine ecosystem. But despite their fearsome reputation, most of Cape Cod's sharks are not a threat to humans. "There are more than five hundred species of sharks around the world, but 80% are four feet or shorter," explains Tony LaCasse, Media Relations Manager at Boston's New England Aquarium. "There hasn't been a shark death in Massachusetts in over eighty years. That was in 1936 when a boy from Dorchester was bitten while swimming off the coast of Mattapoisett. But he probably would have survived if he'd been bitten today, given medical advances since then."

For curious visitors, the Cape is the perfect place to explore the surprising science of sharks. Institutions like Chatham's Atlantic White Shark Conservatory, Brewster's Cape Cod Museum of Natural History, and Wellfleet's Mass Audubon Wildlife Sanctuary offer educational programs throughout the summer for kids and families aimed at dispelling myths about sharks and raising awareness of both their importance and the danger they face. 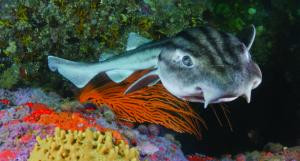 "Sharks are in great peril," LaCasse says. "This is in part a function of vilification and commercial exploitation. Unlike other fish species, which lay from thousands to millions of eggs at a time, it is difficult for sharks to reestablish their populations because they only give birth to a handful of offspring at a time."

These efforts at widespread education are paying off. "There has been a huge change in public attitudes. A couple of years ago, there was a white shark stranded near Chatham, and over one hundred people dug a trench in an effort to pull the animal back into the water. It was remarkable," LaCasse says. "The Outer Cape is home to the National Seashore. Now that people are realizing that we're not on the menu, the wildlife in the region has almost become an attraction in and of itself."

For the safety of both beachgoers and sharks, visitors should always follow a few basic guidelines. Stay at least one hundred and fifty feet away from seals at all times, swim close to shore, and avoid swimming alone, particularly at dawn or dusk. Thanks to a joint effort by the National Seashore, municipal and state governments, and the Atlantic White Shark Conservatory, shark advisory signs are conspicuously posted at beaches throughout the region and online, outlining basic facts and safety tips.

With education, awareness, and a bit of common sense, humans and sharks can co-exist peacefully and enjoy Cape Cod's beaches together.