Six-Ounce Donuts have Us Buzzing

Ever wanted to chow down on a donut that looks like a cheeseburger? What about one where a frosted groundhog is peeking out of the hole? While these specific treats are seasonal, the bakers at Hole in One Donut Shop in Eastham have been working to get more creative with their treats. “The creativity has really created a new buzz,” says Ken Taber, the president. 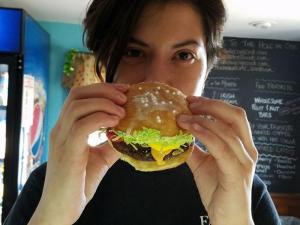 The cheeseburger donut is especially popular and is most prominent on April Fools Day. A sweet glazed donut for the bun, a chocolate cookie for the patty, sprinkles for seeds, and fake sugary vegetables and cheese make it a rather convincing burger.

Taber says, “We know what we do well, and we love what we do, but we’re having a lot of fun with it, and our customers have fun. You’re going to feel like a kid again.”

Of course, the regular donuts are nothing to sneeze at, either. “The donuts do have precedent. We built our business on donuts and muffins,” he says. During the off-season, they serve up to 44 dozen every morning, and more than 250 dozen daily throughout the summer. It helps that they’re not selling your average donut. “Most competitors’ donuts are about three ounces, while ours are about six. They’re huge.”

They serve about 21 flavors, from Plain to Boston Cream, but according to Taber, the Sour Cream Donut is one of the most popular. “It’s addicting; there’s no doubt about it,” he says. “I’m a big fan of the Honey Donut. When you bite into it, it’s the most gooiest thing you can think of.”

(PICTURED) The Donut Burger at Hole in One Donut Shop