The drama involved includes a thousand different stories pertaining to the personal incidents of the tragedy.

Many will call it the shipwreck of the century. The proportionately small number of deaths may reduce the importance of the event. However, the drama involved includes a thousand different stories pertaining to the personal incidents of the tragedy. 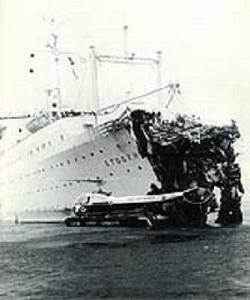 It was late in the evening of July 25, 1956 and the Queen of the Italian line, ANDREA DORIA, was steaming towards New York City, fifty miles south of Nantucket Island. The crew and passengers were making plans for following morning when they would arrive in the city.

The Swedish motor vessel STOCKHOLM had left New York that day and was sailing east. There were fog banks on the ocean that night. Ships would sail in and out of the fog so that radar was of a prime necessity.

Just how it happened, or why, is still being argued, but the STOCKHOLM, with an extra strong bow for plowing through ice-filled northern European waters, sliced into the side of the three-year-old pride of the Italian fleet. The STOCKHOLM'S bow knifed a third of the way through the forward section of the ANDREA DORIA near the bridge and, unfortunately, hit the empty fuel tanks in the lower decks of the DORIA, filling them with sea water and causing the liner to take an immediate starboard list. It was 11:09 P.M. By midnight radios were broadcasting the messages throughout the New England area. Every ship within 100 miles of the accident raced to the scene. In one of history's greatest rescue operations at sea, when the other ships took on most of the 1,709 passengers from the stricken liner. Fifty-two died, either aboard the crippled ship, during the collision or in the fog-shrouded waters. For eleven hours, while rescue operations were underway, the Italian liner stayed afloat. Then at 10:09 A.M. the following day the ANDREA DORIA, abandoned by all but the dead on board, turned over and sank in 225 feet of water where she rests today.

Much time and effort have been spent trying to figure a way to bring up the sunken liner. Most of the ideas are pipe dreams and need better technology before they can be implemented. There was reported to be a million dollars in cash and over three million more in other valuables that went down with the ship. The fortune may never be recovered. The hull lies in over 250 feet of water and at that depth, divers can only work for short periods of time and then not efficiently. Using an underwater habitat, divers went down to the ANDREA DORIA in the summer of 1973. The group engaged in the salvage reported that they were unsuccessful in recovering any of the treasure aboard the sunken liner.

It is ironic, however, that this should ever have happened.And, but for international laws governing the sea, the ANDREA DORIA might still be sailing today. When the Coast Guard Cutter HORNBEAM arrived on the scene, early in the morning, she wanted to take the ship in tow to shallow waters, so that if she sank she would rest on the bottom with most of the hull above water.

Salvage, in that position, would have been relatively easy and only a matter of days. There was shoal nearby where the water was only 70 feet deep. Without a release for the responsibility of the ship (she was foreign registry) the HORNBEAM could not put a line aboard the stricken vessel. About 9:30 A.M., the word came through granting permission for the tow but by then it was too late. The main deck was under water and it was the beginning of the end of the ANDREA DORIA. The Captain and the last remaining crewmen came aboard the HORNBEAM and were brought ashore, sad, but alive.

All photos and captions on this pages are drawn from the volume Cape Cod Maritime Disasters, a 130-page hardcover edition with over 200 photographs, many by the author as well as reprints of old glass plates depicting wrecks from the nineteenth century.