Learn the Science Behind the Beauty of Cape Cod's Hydrangeas 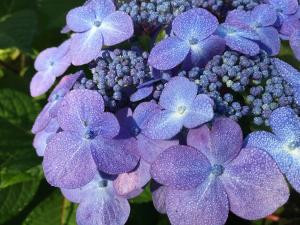 Cape Cod summers come alive in a kaleidoscope of violet, pink and white when hydrangeas are in full bloom. From coastal resorts to town squares, to local cottages, these gorgeous balls of soft color remind visitors how magical Cape Cod truly is.

Festivals in towns across the Cape celebrate these blooms, but few places take hydrangeas as seriously as Heritage Museum and Gardens in Sandwich, who even have their own Display Garden and Test Garden.

The Test Garden not only appeals to visitors but is scientifically designed for prime growing conditions. Water features bubble merrily while guests stroll down stone steps and shell walkways, surrounded by an unprecedented variety of hydrangeas and other perennial flowers.

“We’ve really done well here at Heritage,” says Mal Condon, Curator of Hydrangeas at Heritage Museums & Gardens. As President of the Cape Cod Hydrangea Society and a hydrangea grower for over forty years, he’s one of the many experts happy to dispense wisdom on the plants' biology and care. “What we’re doing in the Test Garden is making stronger, reblooming hydrangeas.”

There are certain breeds that flower later in the season, and they’ve been trying to hybrid them. “This way if a frost or something knocks them out early, they’ll come back,” he says.

For the recreational gardener who is lucky enough to live in a climate that supports hydrangeas, there’s also Hydrangea University, where students learn about the best way to care for these plants at home. According to Condon, “Hydrangeas are fairly easy to grow and do not need much fertilizer.”

Condon recommends that home gardeners should first know the kind of hydrangea they are growing. “The key thing people need to identify is that there are six major species, and 95% of the time people only ask about hydrangea macrophylla. It doesn’t like it hot, it doesn’t like it cold. That’s why they do so well on the Cape. Not that the others don’t grow well here, but these really seem to dominate.”

“They are by far the most significant commercial species, with their great blooms forms, color, character, and likeability,” says Condon. “And, they are especially popular here on Cape Cod, with our typically moderate maritime coastal climate.”

Another common question is how to influence hydrangea blooms from shades of pinks to shades of blue, which relates directly to soil acidity. Condon says, “It only occurs in two species; macrophylla and serrata. Adding aluminum in the soil generates blue blooms. If the soil is sweet, it’d be very easy to get pinks, because it’s harder for the plants to drink up the aluminum in the soil.”